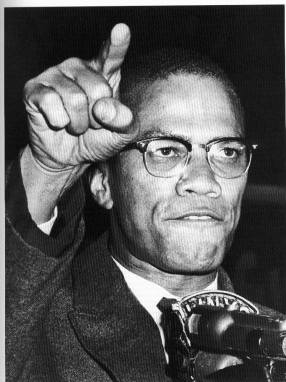 (If you’re going to read this, take the time to briefly touch the videos and links- it’s the only way things will make sense, I promise.)

Malcolm X was killed today – 49 years ago at 3:30 p.m. on 165th Street, New York City. He was shot, in front of his family, in front of his friends, in front of over 600 earnest listeners at the Audubon Ballroom. He knew it was going to happen that day, he really did, but he went with it anyway. He was prepared to die.

Malcolm died calling for a “black revolution”.  He distinguished this from a “Negro revolution”, which represented civil rights in the United States. He prophesied a Marx-esque global overturn in society. He wanted “Negroes” to join in on the global revolution that “is world-wide in scope and in nature. The black revolution is sweeping Asia, sweeping Africa, is rearing its head in Latin America. The Cuban Revolution…. They overturned the system”. He foresaw a world of egalitarianism for all people, white, “black, brown, red, or yellow”. At the time of his death, he didn’t see whites as evil at all – he met people “whose eyes were the bluest of blue, whose hair was the blondest of blond, and whose skin was the whitest of white” that he could call brothers (Malcolm X, “A Message to the Grassroots”). And as he called for his global revolution in 1965, for his new vision of equality, he was shot and killed. Don’t listen to any media that tells you otherwise – “read the books” (Maya Angelou, recalling Malcolm).

“It is incorrect to classify the revolt of the Negro as simply a racial conflict of Black against White, or as a purely American problem. Rather, we are today seeing a global rebellion of the oppressed against the oppressor, the exploited against the exploiter.” – Malcolm X

Of course, that’s not the whole story. Malcolm was never a mainstream civil rights leader, and never wanted to be and chose not to be. The most mainstream he got was on his deathbed, still calling for a global revolution. He was not a Martin Luther King, who he called a member of the black bourgeoisie. He didn’t have a white picket fence and didn’t work with white liberals on a daily basis. He was a field negroe, a common man.  He was a radical compared to the other great civil rights leaders of his time (this is not to say he didn’t work with the mainstream; he personally knew James Baldwin, Bayard Rustin, Maya Angelou, Sydney Poitier, Adam Clayton Powell, and Shirley Du Bois).

What differentiated Malcolm X from the others was his conception of African Americans. He never saw himself as an American, he saw himself and other blacks as Afro-Americans; namely, people robbed from their ancestral past in Africa, forced to live in America. He called on others to remember that past, to remember that legacy. Because of this honorary sense of African Americans, he “was the only leader out there that taught black people to be proud of being black” (Robert Haggins, Malcolm’s photographer.)

“So we are all black people, so-called Negroes, second-class citizens, ex-slaves. You are nothing but a [sic] ex-slave. You don’t like to be told that. But what else are you? You are ex-slaves. You didn’t come here on the “Mayflower.” You came here on a slave ship — in chains, like a horse, or a cow, or a chicken. And you were brought here by the people who came here on the “Mayflower.” You were brought here by the so-called Pilgrims, or Founding Fathers. They were the ones who brought you here.” – Malcolm X, “A Message to the Grassroots”

A friend asked me once, “What did Malcolm X actually DO?” The simple answer is nothing; he didn’t organize unions like Phillip Randolph, marches like Bayard Rustin, or sit-ins like Martin Luther King. Malcolm X didn’t deal with unjust laws or racial separation per se. He dealt with changing minds and perceptions. In the black South, whether it was Birmingham or Atlanta, the largest issue was Jim Crow: bus segregation, school segregation, church segregation. Malcolm X didn’t have to deal with laws in Detroit, New York City, or Omaha. He dealt with urban ghettos and cyclical poverty. He dealt with people who were lost as to their purpose of living, as to their identity, as to their future. He taught his listeners to love themselves, to love their heritage, to love the world around them. He taught them to identify with oppression everywhere, and to fight for justice anywhere. He didn’t teach full integration – he saw that as whitewash. Instead, he taught embracement, nationalism, self-confidence.

“Racism is both overt and covert. It takes two, closely related forms: individual whites acting against individual blacks, and acts by the total white community against the black community. We call these individual racism and institutional racism. The first consists of overt acts by individuals, which cause death, injury or the violent destruction of property. This type can be recorded by television cameras; it can frequently be observed in the process of commission. The second type is less overt, far more subtle, less identifiable in terms of specific individuals committing the acts. But it is no less destructive of human life. The second type originates in the operation of established and respected forces in the society, and thus receives far less public condemnation than the first type. When white terrorists bomb a black church and kill five black children, that is an act of individual racism, widely deplored by most segments of the society. But when in that same city – Birmingham, Alabama – five hundred black babies die each year because of the lack of proper food, shelter and medical facilities, and thousands more are destroyed and maimed physically, emotionally and intellectually because of conditions of poverty and discrimination in the black community, that is a function of institutional racism. When a black family moves into a home in a white neighborhood and is stoned, burned or routed out, they are victims of an overt act of individual racism which many people will condemn – at least in words. But it is institutional racism that keeps black people locked in dilapidated slum tenements, subject to the daily prey of exploitative slumlords, merchants, loan sharks and discriminatory real estate agents. The society either pretends it does not know of this latter situation, or is in fact incapable of doing anything meaningful about it.” —Stokely Carmichael, Honorary Prime Minister of the Black Panther Party.

Institutional racism consisted but runs far deeper than Jim Crow. It penetrated the hearts and minds of those in power – whites. It affected Malcolm’s people in the ghetto and on the bus and everywhere in between. Laws don’t change minds, words change minds. Malcolm dealt with minds, perceptions, and identity. That needs to be clear.

“But as racism leads America up the suicide path, I do believe, from the experiences that I have had with them, that the whites of the younger generation, in the colleges and universities, will see the handwriting on the walls and many of them will turn to the spiritual path of truth – the only way left to America to ward off the disaster that racism inevitably must lead to.” – Malcolm X, “Letter from Mecca”

He did this as a performer. Whether it was as a porter on trains that ran in and out of Detroit or on the podium at Oxford University, he was the same Detroit Red, wooing and playing to the audience. He was there to change minds and to get others to act. He wasn’t there for laws, he was there for minds. He wasn’t there to desegregate schools or buses; he was there to remove the mentality of racism and to create the identity of black conscious. He saw politics as a tool for the benefit the black community, not politics as a tool in itself. His speeches reflected just that. He didn’t DO anything, because he didn’t see DOING as enough. Putting black people in white schools won’t end racism, only changing the minds of whites would. And that was only the first step – because there was a revolution coming for a new global order (let’s be clear, time tells us he was dead wrong on this prophecy).

“We must understand the politics of our community…we must know what role politics play in our lives” — Malcolm X, “Ballot or the Bullet”

Malcolm performed to all sorts of audiences across the world. He met with kings, dictators, and presidents across Africa, with communists in South America, with leaders in Europe, and with lay blacks back home. It was for this reason among others that he is so difficult to understand – at one speech he’d call for integration and capitalism, on the other for segregation and communism. On one stage he’s a Muslim whose faith guides his actions, on another stage he’s a Muslim who has no intention of letting people know. The factor of time causes just as much confusion – he began in Black supremacy and died almost mainstream. To discuss all of that requires a whole book. Here, I am trying to highlight the most powerful continuities of Ossie Davis‘s “black shining prince”.

When looking at this man in his totality, agreeing with him or not, we find a powerful lesson. We see the story of someone who thought big – civil rights wasn’t just about America. We see the story of someone who never compromised his values, yet was always willing to compromise his style. We find someone who thought deep, to the real issues of the time. And we find someone who taught me to be myself and to love myself and try to be no other than myself. Manning Marable tells it best: “Of the figures who tower over twentieth century American history, perhaps none is more complex, more multifaceted and controversial, than Malcolm X” (Malcolm X: A life of reinvention).